Early today the Standard Newspaper which is alleged to be owned by Baringo Senator Gideon Moi published an article abusing Deputy President’s office.

According to Standard Media, it had reported that the Deputy President Office is an “A Big Office and No Power” explaining that it is a Shattered dream to see that the chemistry between Deputy President William Ruto and his boss is dead.

The article further stated that Ruto is always loudly absent in times of crisis expanding that even the Cabinet Secretaries, Security Agencies are ignoring his calls and that they have no time for him.

This caused an uproar in the internet by Ruto’s allied Legislators and his followers.

The first to throw salvo at Moi is the Gatundu South legislator Mosses Kuria who argued that the Standard was busy wasting space meant for adverts to malign the DP saying this was instead adding Ruto’s popularity in the country. 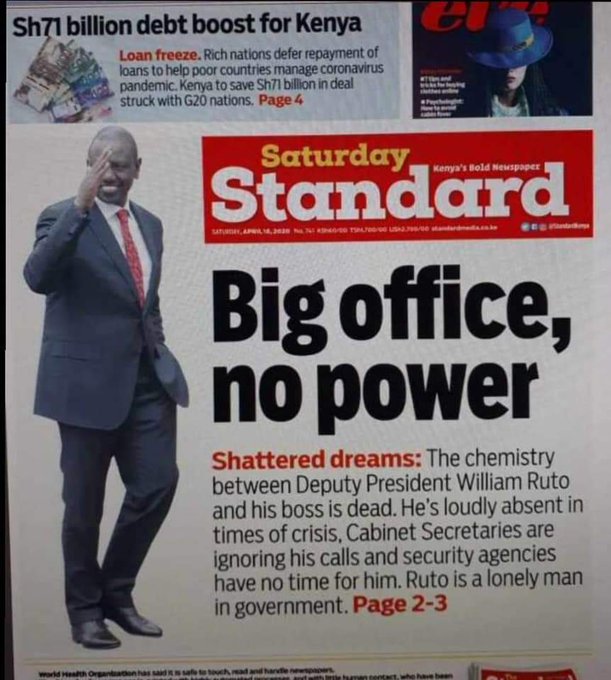 Kapsaret Member of Parliament Oscar Kipchumba Sudi also weighed into the matter with name calling undertones referring to anyone behind the headline as just empty-headed dynasties.

He called upon members of the public to ignore such propaganda and if possible help shame them until they feel the heat.

“Big Office with power but zero brains, Big shame to the dynasties including the owner of this newspaper Gideon Moi. Emptiness with too much alcohol,” Sudi hit back.

We are not aware of any threats issued to anybody, Mandago responds DCI.

County to partner with SPIA in setting up a peacekeeping memorial in Eldoret.